This is the official wiki for the cultivation fantasy wuxia web novel Dual Sword God written by Shadowsfinger published on Amazon. The novel and book series is currently on going with regular updates for each book's early access posted on Patreon. Teaser chapters are also available on the platforms such as Wattpad, Royal Road, and Tapas.

A new life starts with the end of another.... leading to the birth of an invincible legend! Born without any talents and suffering a life full of struggles, Feng Yu had thought his life's dreams were only a fantasy, his wish to become a peak cultivator forever beyond himself. Until one day, in a strange ancient ruin, he encountered an accident, one that transported his soul to another world, transforming his entire existence.

In the Bright Flame Kingdom, there exists a small town known as Machen Town. A boy of age 15 called Feng Yu was beaten to death by the Xiang Clan's son. Yet, upon his demise, a soul that had traveled through time and space quickly took over the body, merging as one new being. It was the soul of a martial cultivator from another world, also bearing Feng Yu's name. Realizing that he had a second chance at life Feng Yu decided to take in his new identity in full stride. With a series of circumstances, he chose to pursue his goal of reaching the summit of martial arts through the arts of swordsmanship, all while gradually unearthing the powers of his mysterious bloodline and the world around him.

This is the tale of a warrior who wields two unparalleled swords!

A hero on an epic adventure to godhood!

"A true dragon cannot soar the nine heavens if it still lingers in a river..."

"Destiny is what you make it," 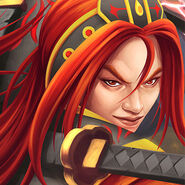 Dual Sword God is a novel about a reincarnated soul that merged into body of a boy with a peerless talent. Now fused as one, both had transformed to become a new entity. The entire story begins with him awakening to this new state in the True Yuan World, filled with the ambitions of both souls as he aims to reach the peak of martial arts.

Community content is available under CC-BY-SA unless otherwise noted.
Advertisement